Quantum Computing: Will It Kill Blockchain?

Are you a blockchain developer trying to build your new blockchain-based app? You are likely relying on the private key-public key encryption, cryptographic hash functions, and consensus algorithms like the ’Proof of Work‘ (POW) to secure your app. 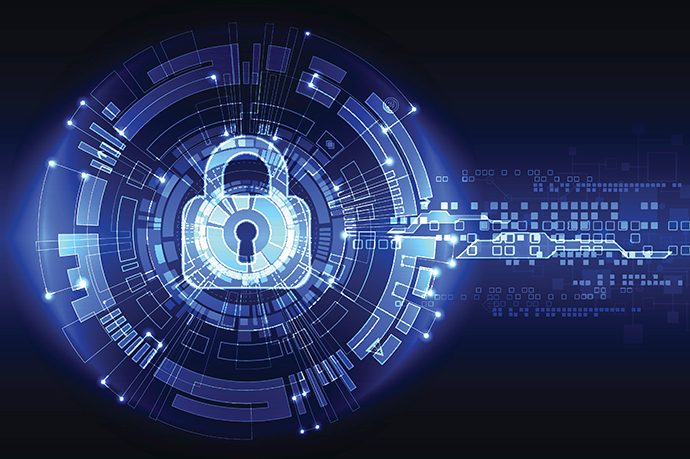 The blockchain technology is increasingly popular due to two reasons:

Read “The promise of blockchain in the digital age” for a detailed view of these promises.

In this article, I focus on the immutable record and transaction security aspects. I will use the Bitcoin blockchain network to explain the subject. Blockchain offers security in the following manner:

I will now explain how the Bitcoin blockchain network accomplishes these 3 objectives.

Bitcoin users have a public key. It’s their blockchain address. If someone needs to send funds to them then he or she will send it to this address.

They also a private key, and they should guard it diligently. This secret should stay with them only, and they need to sign their Bitcoin transactions using this private key. If hackers get access to this, they will easily steal their Bitcoins. Read “Public Key and Private Keys” for more information.

This is because the private key is linked to the public key via the integer factorization method. Take the example of the number 2,868. If I ask you to find the prime factors for this, you will break it down to 2,868 = 2x2x3x239. Hence, the prime factors are 2, 3, and 239. This was simple for you, and your computer will also solve it easily.

Bitcoins‘ POW algorithm ensures no transaction goes through without validation

Each Bitcoin block has the transaction data, the cryptographic hash of the last block, miners‘ address, and the answer to a mathematical puzzle.

A computer algorithm creates a cryptographic hash of the content of the last block. It‘s a long alphanumeric string. Cryptographic hash functions are deterministic, i.e. same data will always produce the same hash.

However, even a minor change to the data produces an entirely different hash. It‘s also one-way, i.e. it‘s easy to produce the hash using a computer program, but incredibly hard to do the opposite! Read “Cryptographic Hash Function” to get an in-depth understanding.

Since each block has the hash of the previous block, effectively blocks are stacked one on top of another. This creates a chain, hence the name ’blockchain‘.

Bitcoin uses the POW consensus algorithm. Bitcoin nodes have users whom we call ’Miners‘, and they use very powerful computers, which often uses ’Graphics Processing Units‘ (GPUs) along with their CPU.

Miners validate transactions, which are initially grouped into a common pool called ’mempool‘. Miners take transactions from this and try to include them in the next available block. For that, they need to find the hash of the previous block.

However, they also need to solve a cryptographic puzzle, to find the answer I mentioned earlier. This requires no skill, but miners must keep trying one number after another, hence, they need powerful computers.

The miner that finds the answer broadcasts it in the network, and the other miners can easily verify it because it’s an asymmetric puzzle. Now our miner has created a new block and recorded the transactions from the mempool into it. Read more about it in “Proof of Work vs Proof of Stake Comparison”.

With today‘s computing technology, no hacker can overpower this decentralized network of miners, and manipulate blocks.

Suppose hackers want to ’double-spend‘ and have identified a transaction in the existing 17th block of the Bitcoin blockchain. They need to do the following:

You can see how hopelessly complex the situation has turned out for our hackers! Add to it another complexity! Bitcoin miners know that they should only accept blocks that have a very small hash, i.e. one with a lot of leading zeroes.

Now, it‘s extremely hard to find a very small hash, and satisfy the Bitcoin network miners, because it requires tremendous computing power. Besides, while our hackers are doing all of these, the entire decentralized Bitcoin network can see that someone or a group is changing the 17th block. The entire network is now on alert!

The fact is that with today‘s computing power, our hackers will find it impossible to cause a ’double-spend‘ in the Bitcoin blockchain. Consult “Blockchain Cryptography” for more information.

You can see that the Bitcoin blockchain achieves the three security objectives because today‘s computers have limited computing ability. This is because the current computing technology uses ’Bits‘, i.e. the smallest unit of storing information.

A ’Bit’ can only have a ’0′ or a ’1′ at any given point in time. The entire gamut of current computing algorithms is built on processing these ’0’s or ’1’s. Read more about ’Bits’, i.e. ’Binary Digits’, in this Computer Hope definition.

However, quantum computing, a technology currently in a research and development phase, doesn’t rely on ’Bits’. It uses ’Qubits’, i.e. ’Quantum Bits’. Qubits can hold a ’0′, a ’1′, and a superimposed state of both, all at the same time. 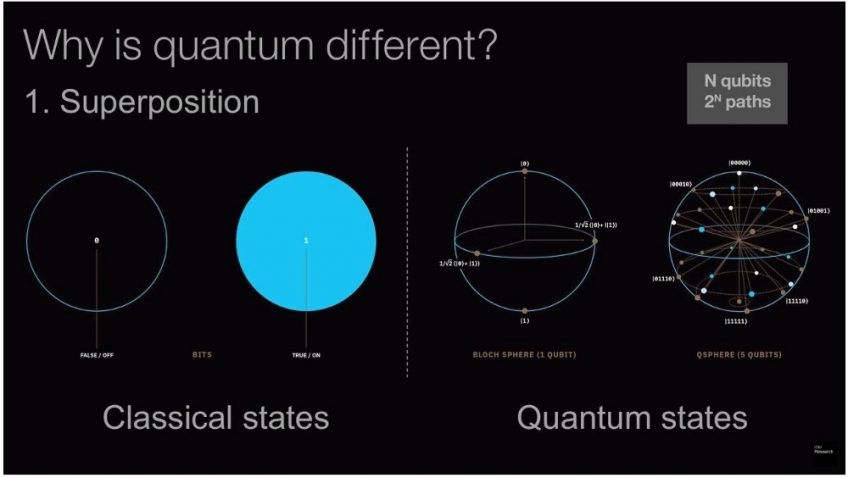 Quantum theory is a path-breaking theory in physics, and it evolved as follows:

Read this TechTarget definition of quantum theory, for more details.

Quantum computing utilizes the above concepts, i.e. a Qubit can have a ’0′, a ’1′, and a superimposed state of both, all at the same time. Note the application of wave-particle duality principle above. In a short while, I will explain how it also uses the ’Uncertainty principle‘.

This concept of superimposition frees quantum computers from the confines of linear equations. It can solve exponential equations, and this added processing power allows for significantly faster processing and needs less energy.

In the future, scientists will be able to use quantum computing and make massive advances in many fields, for e.g.:

However, that could change with the quantum computer. Peter Shor had introduced a polynomial-time quantum algorithm in 1995, which we now call ’Shor‘s algorithm‘.

It dramatically demonstrated how the new algorithm requires a very less number of operations to solve a large prime factorization problem, compared to a classical algorithm. In effect, a powerful quantum computer running ’Shor‘s algorithm‘ could solve such a problem in a few days.

Compare this to hundreds of billions of years that classical computers would take to solve a similar problem! Read more about ’Shor‘s algorithm‘ in “Shor‘s algorithm”.

This can put today‘s private key-public key data encryption at risk. Don‘t lose your sleep immediately, though, because quantum computers aren‘t commercialized yet.

However, keep in mind that many organizations are seriously researching and developing this technology. For e.g., Google and IBM are already working on their quantum computers. If you want to read a few examples of their research, check out the IBM Quantum Experience website.

Responses to the quantum threat to blockchain are coming up. For e.g., a blockchain project team has created “The Quantum Resistance Ledger” and intends to solve the digital signature-related threat.

The QRL project team implements a set of post-quantum secure data encryption algorithms. It’s called ’eXtended Merkle Signature Scheme’ (XMSS). It uses a ’One Time Signature’ (OTS), where you can sign only one transaction with one key.

This makes hackers with quantum computers irrelevant. There‘s no fixed private key for them to hack from a public key. Instead, the signature changes every time the user signs a new transaction.

The project team claims it’s a peer-reviewed algorithm, and they have launched their Mainnet. Read about their XMSS solution in the FAQ section of the QRL website.

In May 2017, researchers at the Russian Quantum Center developed a blockchain that they claim is safe from quantum computers. They did it by combining post-quantum cryptography with quantum key distribution (QKD).

Remember the ’Uncertainty principle’ that Heisenberg had formulated? The very act of observing subatomic particles’ property changes the property.

When hackers try to intercept the keys in transit, their snooping act changes the quantum properties, and makes those keys unusable! Read this techopedia definition of QKD for a deeper understanding of it.

Incidentally, QKD networks are already in use, to manage smart contracts. There are several such networks in the US, Europe, and China already functional. Read more about it in “Russian researchers develop ‘quantum-safe’ blockchain”.

Two researchers from the Victoria University of Wellington, New Zealand, suggest that blockchain can move beyond just using quantum cryptography. They propose quantum entanglement computing to create a new type of blockchain.

They propose to use the entanglement concept from the quantum physics for this. Two entangled quantum particles share their existence, at a point in space and time when they interact with each other. From that point onwards, if you try to measure one, it will influence the other.

Del Rajan and Matt Visser, i.e. the two researchers plan to use this property. They plan to create blockchain where one quantum particle will encode the history of all its‘ predecessors. This follows that if our hackers try to hack a predecessor particle, their snooping act will destroy that particle.

This quantum networked blockchain will survive, though! Remember that the last particle in this blockchain has all predecessor particles‘ in it! Read about their proposal in “If quantum computers threaten blockchains, quantum blockchains could be the defense”.

Blockchain communities need to be proactive

It‘s clear that quantum computers will take some years before a commercial version comes in the market. Hence, blockchain networks and data encryption might be safe now. However, the blockchain ecosystem shouldn‘t underestimate the threat.

As you know, blockchain has attracted a lot of interest, and we may see many businesses and governments adopting it aggressively. Now, consider the impact of a sudden release of quantum computers, which will significantly reduce the security of blockchain immediately.

By that time, businesses, governments, and communities will have invested significant energy and resources to adopt blockchain. They will suddenly find that their investment doesn’t count for much! To avoid such an unpleasant scenario, blockchain communities should proactively address the threat of quantum computing.