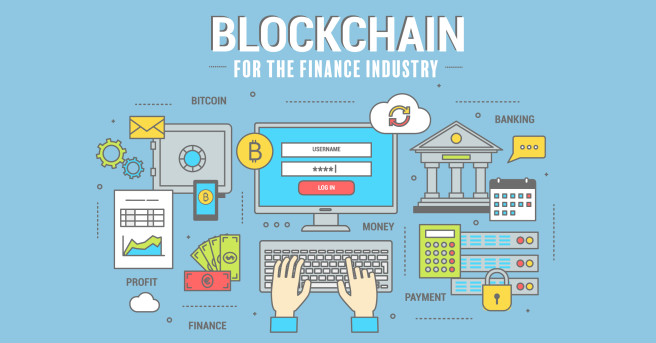 Want to see 5 blockchain examples for the finance industry?

Since blockchain will arguably make the biggest mark in financial services, this is an important topic. Let’s explore it in detail.

There are a number of key areas where companies can use blockchain in financial software and systems. While banks are reluctant to openly discuss potential uses of blockchain, a number of them have recently commissioned studies to identify exactly where they can. These include Citibank, Credit Suisse, and the World Economic Forum.

Blockchain Examples for Financial Use Cases

Blockchain technology using digital currency could be used in both domestic and international fund transfers. While on the domestic front banks are likely to resist implementing blockchain solutions, given that they have already invested heavily in existing centralized solutions, internationally they stand to benefit enormously from such a change.

The reason international transfers stand to gain is the huge disparity between rules and regulations as well as IT systems between the banks from country to country.

While domestic payments take only a matter of minutes to hours, cross-border payments normally take several days at least to complete.

This is because the banks need to make sure they comply with all the necessary regulations. Also, many developing countries actually lack the IT infrastructure to process the transaction any faster.

These slow speeds are frequently a frustration to customers since the receiver is often unaware of when or even if a transaction will be completed successfully.

Inadequate infrastructure also presents a security concern for many transfers since these systems are more open to cyber-attacks and data breaches. These attacks could disrupt transfers and even redirect the funds to a third-party account.

The figures relating to how much of certain developing countries‘ entire GDP is down to remittances are quite an eye-opener. Haiti has one of the world‘s highest remittance vs. GDP rates, some 29% of its entire GDP.

In the Philippines, it is at just over 10% while in Mexico it is 2.7%. When put into perspective, remittances account for 0.7% of the entire world‘s GBP each year. This is an enormous amount of money that is somewhere in the region of $1 trillion.

Traditionally, the remittance market has been dominated by MTO-model companies such as Western Union. Though banks do actually offer this service, the inherent problems of cross-border remittances, such as creating safe and secure partners where receivers can collect their money, have made many banks wary of the market.

There are already a number of companies that are operating blockchain-based international transfer services. These include Abra, BitPesa, and Circle.

While their models are slightly different, Circle, for example, focuses on social payments, while BitPesa (Africa Focused) on B2B payments, they allow money to be wired from one individual‘s bank account, internationally, to another individual‘s account. Because the transactions are peer-to-peer based and encrypted they are secure and cannot be interfered with.

The potential for banks to make vast sums of money handling both small-scale and large-scale remittances is huge. Since not just individuals but companies also rely on these transactions, even leveraging a small transaction fee of just a few percent could result in a huge revenue stream.

Next in the list of blockchain examples for finance industry solutions is a payment gateway. A recent successful ICO by startup Mycelium brought attention to how blockchain could be used to facilitate next-generation payment systems. The company‘s goal is to “bring merchants and consumers together with a blockchain card and mobile wallet.”

While the concept of cryptocurrency existed long before Mycelium, the company‘s decision to use digital tokens as a way to facilitate the transfer of wealth, as well as to incorporate a payment gateway facility, generated huge interest in its ICO.

Mycelium‘s business model makes the need for traditional bank payment processing redundant. Since users can use the Mycelium card to pay for goods and services anywhere and at anytime, using decentralized blockchain technology, transactions are also safer and more secure.

Whether they like it or not, technology such as this will force the banks to undertake a major shift from traditional computer systems to blockchain-based payment gateways. Since traditional payment systems are also less secure, banks will need to make the switch in the near future.

Trade finance is the last of blockchain examples in our list. The automation of transactions essential to trade finance will help the financial services industry make huge savings after blockchain solutions are introduced.

The use of smart contracts to automate approval workflows and clearing calculations will help reduce processing times and enable banks to massively reduce the number of employees needed for this task too.

While this is not good news for their staff, it will also benefit the banks by helping to reduce the number of errors resulting from human mistakes.

The global finance industry holds trillions of bank records that relate to everything from personal account data to stock market transaction ledgers that record stock purchases. A huge majority of these transactions could be recorded using blockchain digital ledgers which would be unalterable and so prevent fraud.

Investment banks’ process of dealing with clearance and settlement is a great example of where blockchain technology could really help improve existing systems. Since banks have to record details of all the loans and securities on their books, a huge amount of transactions need to be recorded quickly and securely.

Already the Australian Securities Exchange has retained the services of Digital Assets Holdings to develop a blockchain-based system to handle its post-trade clearing and settlements. And they are not alone. Here in the U.S, other companies are racing to implement blockchain to improve their slow and often outdated systems.

Blockchain could help banks finally overcome a problem that has been troubling them for years. Banks are responsible for verifying their customer‘s identities. These rules exist in nearly every country in the world and aim to help prevent fraud and money laundering.

The cryptographic protection offered by blockchain, which requires a secure key to access, would ensure that all parties involved in a transaction would be clearly known to the ledger. Since identification is required by law, this feature is essential to all financial transactions.

A number of companies are already working tirelessly to try to develop blockchain technologies that will help banks and other financial institutions with the problem of establishing identity. These companies include Cambridge Blockchain and R3.

Regulatory landscape: The impact Of MASS adoption of blockchain in financial services

While blockchain has many potentially transformative use cases in the financial services sector, governments and regulators need to adopt a pragmatic approach to give it a chance to realize its potential. Given the decentralized nature of blockchain, it poses a challenge to central banks and governments.

No government can control blockchain bitcoin, for example, which is something that threatens their authority. Read more about this in “Blockchain and associated legal issues for emerging markets”.

At the time of writing, countries around the world are trying to work out a pragmatic regulatory framework for blockchain and associated businesses.

In the US, for example, this framework is evolving rapidly. Regulators in the US are increasingly providing clarity through regulatory frameworks regarding the use of cryptocurrencies, whereas they are much further behind when it comes to frameworks for blockchain.

On the other hand, several smaller countries including Malta, Belarus, and Gibraltar have already come up with regulatory frameworks for blockchain-based businesses. Read “Blockchain and the law: Regulations around the world” for more information.

It is important to remember that you need to study the blockchain-related regulations in the country of jurisdiction of your business so that you can comply with them.

Failure to do so could result in prosecution.

How can you successfully build and implement blockchain financial services applications?

Answer: You need to plan thoroughly. Take the following steps:

Need help planning your blockchain project? We have just the right guide for you! Read “What to plan for when undertaking blockchain software development?”.

While blockchain for banks might not currently feature high on their list of priorities, if any bank believes that their operations will not at least be partly underlined by this technology 10 years from now, they are very much mistaken.

So monumental could the decision not to hastily begin implementing blockchain technology be, that in the worst-case scenario, it could see banks losing their core business, namely the facilitation of monetary transactions.

It is my contention that we are at a crossroads where the dreams of those people who oppose the domination of the banks could come true.

Should banks lose control of payment transactions then it also stands to reason that they will lose control of our money savings too. If this is, they will no longer be able to fund the huge mortgage and loan portions of their portfolios, as they are required to retain at least 10% of the total monetary value of loans in hard cash.

Without question, the banks need to retain control over the systems we use to transfer our money or they risk having to dramatically alter their business model or go out of business.

The key to avoiding this is in challenging those companies that are already combining innovation with the potential of blockchain technology early and developing their own alternative systems that allow them to get ahead in the game because failure to do so will cost them very heavily indeed.

If you are also planning to adopt blockchain in your financial services, now is a good time for investing in this emerging technology. As it is a complex technology, you will need specialized skills to implement it. DevTeam.Space can help you here.

DevTeam.Space has an experienced team of software engineers with expertise in blockchain technologies. You can get in touch by filling out this quick form describing your initial requirements for a blockchain project. One of our technical managers will get back to you to connect you with the right blockchain developers.

1. What are the top 5 blockchain examples in financial services?

2. Which banks and financial services institutions are using/exploring blockchain?

3. Which enterprise blockchain frameworks are popular in the banking and financial services sector?