How to Hire and Manage a Remote iOS Developer? 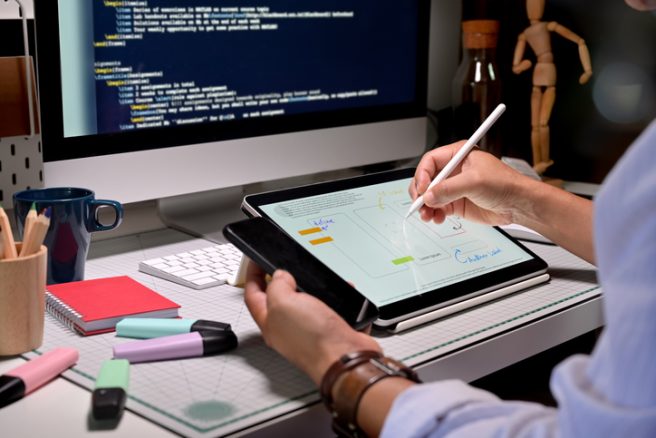 Are you a startup owner or a CTO with a great app idea and are now looking for an expert remote iOS developer?

If you are, then you have made the right decision to tap into the lucrative Apple market. Although Apple only accounts for 14.1% of the total mobile app industry, revenue generated per user is far higher than Android.

In this article, we will go through the process of hiring and managing a remote iOS developer in detail. We will cover aspects like what skills to look for in an iOS developer and how to manage them remotely. So, let’s start.

These statistics do mean that your iOS mobile app will face heavy market competition and you will have difficulty hiring a qualified iOS developer.

You must hire an iOS developer who stands out in the sea of remote developers if you are to build a successful product that succeeds in the lucrative iOS app market. We will show how you can do that by taking the following steps:

Gather the functional and business requirements of your iOS app.

These project requirements will help you to find the best-fit iOS mobile developer.

A developer’s role in your iOS app development project is not about coding only. You want to hire a developer who can think critically, help with the project development approach, assist with architectural solutions, design a user-friendly mobile app, and perform debugging and testing.

Not every remote iOS developer is skilled in all of the above. A senior iOS developer with more experience in building and releasing mobile apps will be expert enough to comment on architecture designs and security issues, however, a relative newcomer won’t be.

An iOS developer with entry-level development experience can be assigned coding and testing tasks.

Your requirement and resource assessment will help you decide what kind of remote iOS developer you want to hire from these:

Junior iOS Developer: These developers have somewhere from 0 to 2 years of experience in mobile app development. They are more likely to work under the supervision of a lead iOS developer. They can be assigned tasks of coding app modules and unit testing.

Mid-level iOS Developer: These developers have worked professionally on multiple app projects, with 2 to 5 years of experience in app development. They do not require supervision and can work independently.

Senior iOS Developer: They are skilled developers with more than 5 years of industry experience. They have worked on complex app projects and are capable of leading junior developers.

Read our guide on how to build an app development team for more information on this.

Now, let’s walk you through some of the essential skills your app developer should have. With these skills in mind, you will make the right hiring decision.

Similarly, a Native iOS app is created and optimized for the Apple operating system running on Apple devices. The native apps are fast, secure, and more interactive because they are built specifically for the mobile hardware they run on.

Your iOS software engineer should be skilled in Swift programming language for app development.

Tools your iOS developers should know include Apple IDE like Xcode and App Code, SDK like Cocoa Touch, and package managers like Swift Package Manager and CocoaPods.

The developer should also be familiar with Apple layout and design guidelines for maximum user experience. They should be experts in using the SwiftUI framework for building the front end for iOS devices.

Hybrid app development is a blend of native and web apps. The core backend of the hybrid app is written in web technologies. It is then encapsulated in a native application using plug-ins. If you plan to target users not using the iOS operating system, you need a hybrid iOS application developer.

Mobile developers should also know programming languages to use these frameworks effectively like, JavaScript for React Native and C# for Xamarin.

Your app developers should be experts in data management and local databases like SQLite. They should be skilled in tools like Core Data.

Core Data helps developers track, save, modify, and filter data on the app. It also helps in storing and retrieving data from RDBMS like SQLite.

Even if every app developer is not familiar with the nuances of app data handling, senior iOS developers should be skilled in data management tools.

To apply these security protocols, your senior iOS developers should be familiar with Apple APIs like CryptoKit and APNs service and libraries like CryptoSwift.

APIs help developers integrate third-party services into their iOS applications that help to streamline iOS app development. Your developers should be experts in API development and integration.

Some of the APIs your iOS developers should know about include CloudRail to manage social network interfaces, cloud storage, payment methods, etc., and ObjectMapper to help in JSON communication with different online APIs.

Moreover, your developers should also know API development since they are an integral part of software products. They should be familiar with REST API architecture for interacting with Restful web services popular today.

Your app developers should know GraphQL, a data query and manipulation language for APIs. They should be skilled in API development tools like Postman, and API techniques like throttling, authentication, and request-response handling.

Your iOS developers should be familiar with mobile architecture design patterns like Object-oriented programming, model-view-controller, and model-view-ViewModel.

Although not every developer is required to design a mobile architecture, they should be particularly familiar with Apple-recommended MVC architecture design.

According to Cisco, was 2021, the cloud is hosting 95% of the software development workload. Moreover, the cloud computing market is expected to reach 832.1 billion USD by 2025.

Your developers should know cloud-based tools and the best platforms for efficient data storage and application management. They should have a strong background in cloud-based servers like IBM cloud and cloud-based services like cloud testing by AWS.

Your developers should also be familiar with the Xcode Cloud platform by Apple. It helps in efficient app development and continuous app delivery by providing cloud-based tools to build apps, run test code, and manage user feedback.

Other skills your developers should be expert in is code verification and testing. Although you can have separate quality assurance testers on your engineering team, every app developer should also have generic code testing skills.

They should participate in code reviews by senior developers to find bugs and hidden security vulnerabilities.

They should be able to verify if the code is meeting functional and non-functional requirements.

One of the testing tools your iOS developer should be an expert in is Appium. It helps developers test both native iOS and hybrid apps for bugs and errors.

Now that you know what to look for in an iOS developer, you can start looking for them. When hiring remote iOS developers, you have two options. Either you can hire a freelance iOS developer or partner with a software company to outsource their iOS app developers.

There are many platforms available online like Upwork that connect you with freelance software developers. You can post alerts for remote iOS developer jobs on these platforms.

Include job title and complete job description to find relevant candidates. Visit the software developers’ profiles to view their skills and past iOS app projects.

The downside of hiring freelance developers lies in the working model of these platforms.

These cons of hiring a freelancer developer lead us to the second option – partnering with a software development company.

Partner with a Software Development Company:

You can find software development companies, their expertise, and reviews on websites like Clutch and AngelList. You can then navigate to the company’s website and go through their past projects and case studies in detail.

The pros of hiring developers through a software development company include:

Once you have hired a remote iOS developer, they are ready to start working on your app development project. At this stage, your responsibility is to manage them effectively. In the case of multiple remote developers, you must also ensure effective and timely coordination between them.

You can hire a product manager to help you with the product development process involving freelance developers. In the case of software development companies, their developers are managed by an in-house project manager.

These in-house managers will be senior iOS developers who can effectively contribute to all aspects of your iOS app development projects. The technical product managers provided by your software development company will lift the burden of having to monitor and manage your developer and so vastly improve team coordination.

For effective management of your remote developers, you can do the following:

Use Project Management Tools and Software:

You can use project management tools to ensure collaboration and participation in your app development team. Some of the management software include:

These management and communication tools help overcome the challenges of managing remote developers. These challenges include differences in time zones, no in-person code review sessions, and no face-to-face talks on project progress and obstacles.

You can use agile frameworks like Scrum. It provides tools to manage software projects in small modules called sprints. The ‘Scrum Master’ ensures the project is progressing according to the set timeline. Daily ‘stand-ups’ are conducted with developers to discuss daily work progress.

DevTeam.Space ensures effective project development and client-developer communication through an AI-powered agile project management tool. It enables clients to communicate and monitor the performance of individual app developers as well as the whole product development team.

The success of your iOS app in the user market depends on the mobile engineering skills of your app developers as well as factors mentioned above such as positive communication skills.

Remote hiring provides very competitive benefits, however, the selection of the right app developer can get a bit tricky.

If you don’t have the expertise and need a qualified and expert remote iOS app developer, contact DevTeam.Space. Our experienced technical project managers will connect you with our field-expert mobile iOs app developers and answer any questions that you might have.

1. How can I choose an app developer?

As a recruiter, go for a mobile app developer interested in your app idea and business. with a preferably a background in computer science. You can post a job alert on hiring websites or partner with an app development company. Access their developers’ development, problem-solving, management, and communication skills by going through past projects and past clients’ feedback.

2. How can I prevent my iOS app idea from being stolen by a hired developer?

Make sure to sign an NDA (non-disclosure agreement) and a document stating that you are the sole owner of the intellectual property before the contract begins. Good news – DevTeam.Space signs these agreements with all their onboarding clients.

3. How long does it take to develop an iOS mobile app?

The features and app scope will dictate the total hours required to build an app. On average, iOS app development takes 131 hours.