How to Convert IOS app to Android app? 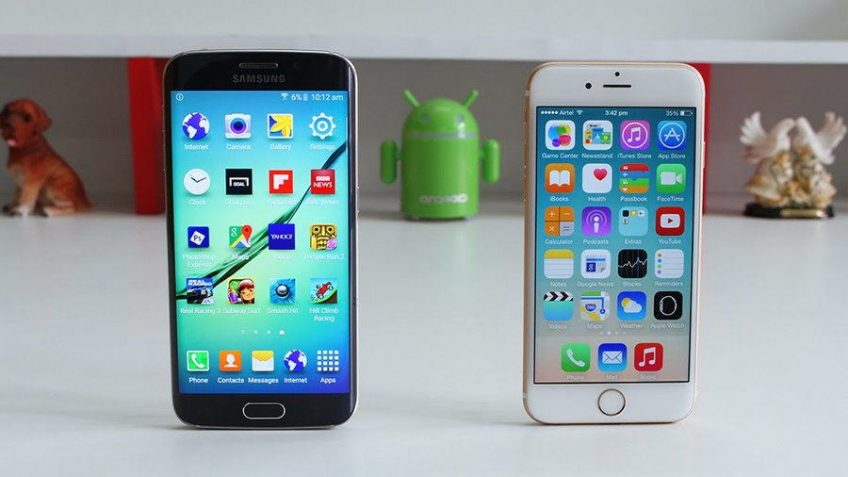 You may have already launched an iOS app as part of your business plan, however, you may have felt the need to launch an Android version too. You might be wondering how to convert an iOS app to an Android app. I will explain that in this article.

Why convert an iOS app into an Android app?

Android and iOS are the two most popular mobile operating systems. Together, they commanded a 99.8% market share in mid-2017, as this Moneycontrol report shows. However, that doesn’t quite reflect the full reality.

iOS is Apples’ proprietary ‘operating system’ (OS), and only Apple devices use it. It’s interesting to note that Apple has highly loyal customers. They remain committed to iPhones, and Apple enjoys a legendary fan following among them.

On the other hand, Android is Googles’ OS, however, many other companies use it in their devices. This results in Android’s significantly higher market share. As of Q2-2018, Android commanded 88% market share, while iOS has a market share of 11.9%, as this Statista report shows.

As part of your business strategy, your first priority might have been to launch an iOS app. However, it’s evident that the Android space is too large for you to ignore. It represents a large market opportunity, therefore, it’s a compelling reason for you to convert your iOS app to Android. 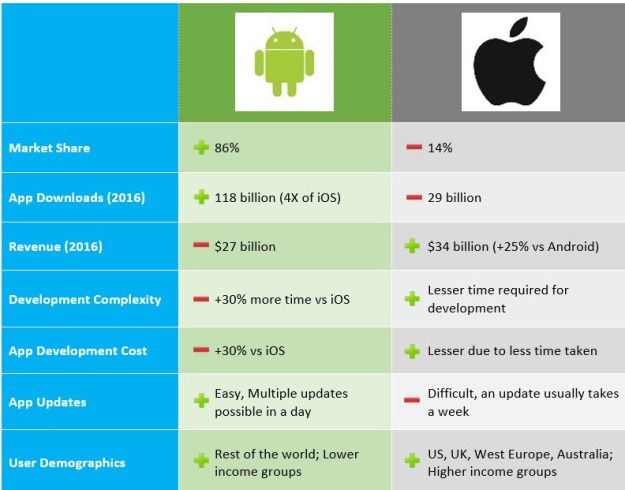 Before converting your iOS app to Android, you need to factor in the key differences between the two. It’s not just about different devices and manufacturers. The ‘user experience’ (UX) is entirely different in Android vs iOS.

While Android uses bottom navigation, iOS uses tab bars. Another key difference is in the use of buttons. Android phones use 3 buttons, which are ‘Home’, ‘Back’, and ‘Multitasking’. In comparison, iPhones have only one button, which is ‘Menu’. Read more about these differences in “Nomenclature of mobile app visual elements — Android vs iOS”.

When you plan to turn your iOS app to Android, remember that Android offers a far greater degree of customization. For e.g., iOS allows only Safari as the mobile Internet browser, Android lets users use 3rd party browsers.

Android users can use any SMS client, however, iOS users need to use the default SMS app. Lock screen, launcher, and even ROM can be customized in Android, whereas iOS doesn’t allow these. Read more about these customization options in “Why Android customization still beats iOS”. Your project planning needs to factor this.

Android is more ‘open-source’ than iOS

Your iOS to Android app conversion project planning needs to factor in the fact that Android is partly open-source, whereas iOS is ‘closed-source’. Your business stakeholders might opt to introduce more flexibility owing to the open-source components in Android. Read more about this difference between Android and iOS in “Android is “Open” and iOS Is “Closed” — but what does that mean to you?”.

More and more users utilizing their smartphones for communications, whether work/business-related or otherwise. File transfer is an important feature. Android makes file transfer easier, whereas iOS offers limited options. When you migrate your iOS app to an Android app, you might want to take advantage of it. Read more about this difference in “Android vs. iOS: 9 reasons you shouldn’t ditch Google’s mobile OS”.

Many more devices use Android than iOS

As I have discussed the larger market share of Android, you can clearly understand that a lot more devices use Android than iOS. This means that your iOS to Android app conversion project plan should factor in the different screen dimensions.

The differences I have listed above aren’t exhaustive. There are many other differences between Android and iOS, however, I have discussed the key ones that will influence your project planning. To read more about Android-vs-iOS comparison, check out “Android vs. iOS”.

Steps to convert an iOS app into an Android app 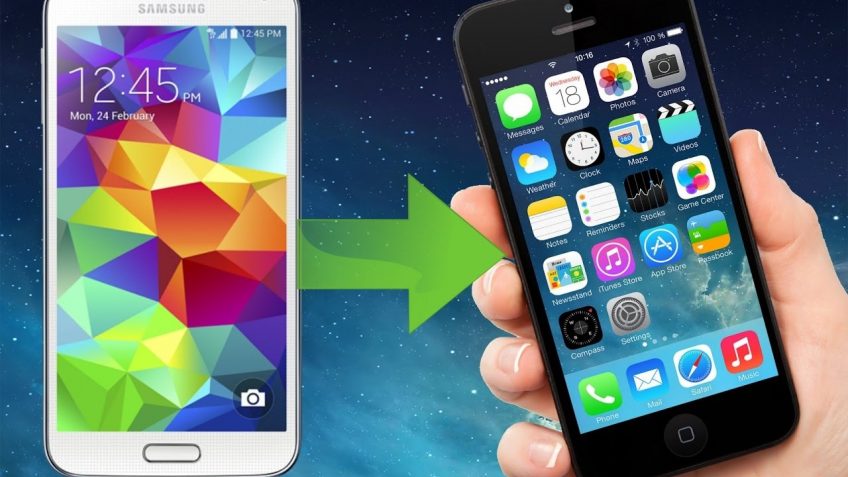 Step #1: Onboard an iOS to Android app conversion team

A mobile app is a ‘System of Engagement’ (SoE). ‘Agile’ methodology is more suited to this project, compared to the traditional ‘Waterfall’ methodology. To know more about the differences between these two methodologies, read our guide “Waterfall vs Agile: which methodology is right for your project”.

It’s time you create a comprehensive and realistic project plan. Identify your Agile project vision. Create a product roadmap and an Agile release plan. Plan your Agile ‘Sprints’, i.e., iterations. Use the right tools for managing the project end-to-end. Our guide “The 10 best Agile project management tools in 2018” can help here.

You have already seen how Android is markedly different from iOS. The Android UI offers more flexibilities, moreover, file-sharing is easier. The business and marketing stakeholders in your organization will likely want to introduce features to take advantage of these.

Step #4: Reassess your ‘Mobile Backend as a Service’ (MBaaS) arrangement

Are you prepared to cater to the potentially large number of new users? How’s your preparedness for the revised NFRs like scalability and performance? Is your existing MBaaS arrangement sufficient to deal with these?

You need to take a hard look at this. If you need to get a new MBaaS provider, consult our guide “How to choose the best Mobile Backend as a Service (MBaaS)?”.

Step #5: Get the right Android IDE

Get the right tools and resources expedite this complex development project. Start with the ‘Integrated Development Environment’ (IDE). Android Studio is a very popular IDE for Android development, and I recommend you use it.

You have quite a few programming languages to choose from, in this iOS to Android conversion project. To make matters simple, I will recommend Java. The 2nd recommendation is Kotlin, which is a recent introduction. Kotlin is very much like Java, however, it’s easier to learn. Read more about it in “I want to develop Android Apps — what languages should I learn?”.

Step #7: Use libraries to expedite the coding

I recommend you use libraries to expedite your project further. These can help with setting app rules, graphics effects, templates, communication protocols, etc. Check out the following libraries:

Android plugins can help you significantly. They improve your efficiency, moreover, they help with syntax. There are many plugins available, and I recommend the following:

Now you take the next step to turn your iOS app into an Android app. You create the UI using Android Studio. Android Studio provides a user-friendly layout editor. Designers can drag UI elements into this visual design editor, therefore, they don’t need to write the layout XML manually.

Read “Build a UI with Layout Editor”. The layout editor provides you with a palette, a component tree, a toolbar, a design editor, and an ability to control the attributes for the selected view. The instruction I have referred to describes how to create a new layout, create a layout variant, convert a view, find items in the palette, and many other functions.

Step #10: Coding to migrate an iOS app to an Android app

You already have your iOS app codebase. It might be in Objective-C or Swift. Now, you need to code in Java or Kotlin. You can code the entire app from scratch. On the other hand, you can use code porting tools to expedite the project.

One such tool is “Objective-C to Java – O2J automatic source code translator”. It automates one-way conversion from Objective-C to Java. The developers of this tool claim that one can save 80% of the coding time with it. There is also a tool that converts Swift code to Kotlin. It’s called “SwiftKotlin”, and you can access it in its’ GitHub repository.

Lisa Luo, an Android development expert, has written a guide on converting Swift code to Kotlin. You can read it in “Converting your iOS app to Android using Kotlin”.

Android Studio lets programmers create new projects, and offers easy ways to build, debug, and run them. It can deploy code to Android emulators, alternatively, you can also use a physically connected device.

To build your app for the first time, click the “Run” button. Android Studio prompts you to select a deployment target. If you haven’t connected any physical device, then you can use a virtual device. Read “Create and manage virtual devices” to know more.

You can change the run/debug configuration, change the build variant, build your project, monitor the build process, configure the project for an instant run, etc. Read “Build and run your app” for more details.

Now is the time to open your app up for business! You need to publish the Android app to “Google Play”. There are stringent guidelines for it.  Read “Publish your app” for the detailed instructions.

I recommend you use the tried-and-tested ‘Scrum’ technique to manage the project. The ‘Scrum master’, i.e., the PM leads a cross-functional ‘Scrum team’ where developers and testers work together. Business analysts had provided the requirements in a document called the ‘Product backlog’.

The scrum team estimates and prioritizes the requirements into ‘Sprints’. The team conducts a ‘Daily stand-up meeting’ to discuss the project status. Project stakeholders approve the sprint in a ‘Sprint review meeting’ if the features work demonstrably.

After the sprint, the team conducts a lessons-learned meeting called the ‘Sprint retrospective meeting’. Read our guide “How to build a Scrum development team?” for more details.

Got a bigger iOS-to-Android conversion project in mind?

An iOS to Android app conversion project is almost a custom development project. The cost estimation depends on your requirements. MBaaS providers display their prices on their websites. You will need to hire developers, designers, and testers. Depending on the geography, the manpower cost could be high. We can help you find expert iOS developers for hire, manage them easily, and complete your development project successfully and according to your deadline.

Some of the required skills could come at a premium in some geographies, moreover, the hiring lead-time could be high. You might need to engage a development partner. Our guide “How to find the best software development company?” can help you with the due diligence.