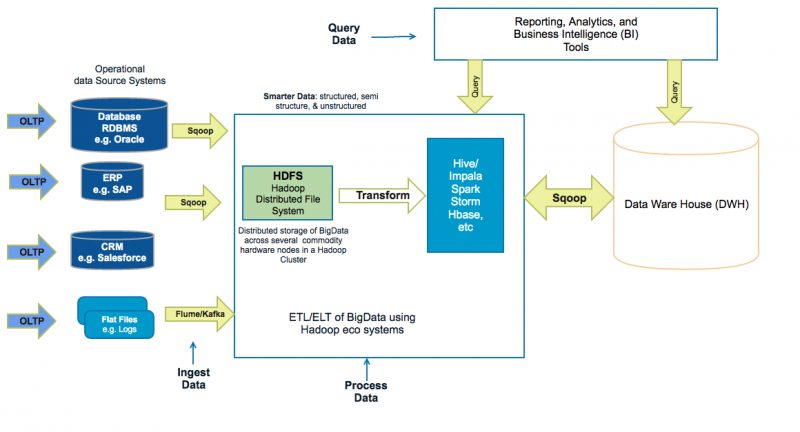 Do you remember the old mainframe days? Users would enter data in the dumb terminals, and those terminals weren’t capable of anything else. All processing would happen in the Mainframe.

In comparison, today Netflix accounts for 31% of the North American Internet traffic and is heavily reliant on microservices. We have indeed come a long way!

The advent of Java, arguably one of the most powerful programming languages ever, has changed the enterprise application development landscape completely.

While Java with its‘ rich array of features lets the Enterprise get its‘ job done in a variety of ways, concerns of maintainability, manageability and need to have many releases throughout the year have prompted the projects teams to create various architectural models for the enterprise projects.

In this article, I will describe the five most popular Java app architecture the enterprise of today uses, with their pros and cons. 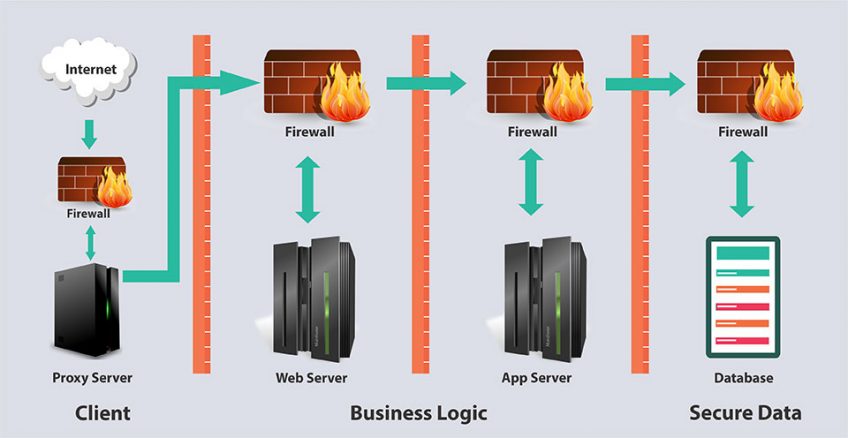 Today‘s enterprises have been storing their data using large ’relational database management systems‘ (RDBMS) and tables in these databases have a massive amount of corporate data. The layered architecture is the most common today because it’s built around data stored in these tables.

As you know, many of today’s Java enterprise apps are built using famous frameworks like Java Platform Enterprise Edition (Java EE), Drupal, and Express. These platforms themselves follow this layered architecture, and as a result, the applications follow this model too.

This enterprise Java applications architecture is designed so that the data enters the very top layer. The data then flows through the other layers, and finally reaches the database at the bottom of the layers. The different layers can, and usually do, have different tasks. One layer may check the data for consistency, and another may reformat the values to maintain a common standard in the application.

The Java developers have adopted this architecture in a significant manner, for e.g. most web frameworks employ the ’Model-View-Controller’ (MVC) structure as a standard development approach. MVC is an example of layered Java app architecture. It‘s common to find programmers experienced in specific layers, and teams organized according to the layers.

How does MVC work? The model layer sits just on top of the database and has the business logic. It also contains information about the kind of data the database holds. The view layer is at the top with possibly CSS, JavaScript, and HTML code. The controller is in the middle containing the various rules for transforming data traversing between the model and the view.

There are both pros and cons of the layered architecture. Following are some of the advantages:

Although the most common architecture, these can also several difficulties in managing this. For e.g.:

This is suitable for the following scenarios:

Event-driven architecture for enterprise Java projects: For the apps that wait on data You have seen apps that are active only when there‘s data for processing, and inert at other times. Many web apps waiting for human interaction are good examples, however, in the world of networking also, there are applications that wait for data to arrive.

In the event-driven architecture model, there is one central agent that accepts the input data. This architecture has separate modules for different functions, and the central agent directs the data to an appropriate module. The word ’event’ in the name refers to this handoff.

Take the example of a website that uses JavaScript. The mouse clicks and keystrokes by the user are events. In this case, the browser performs the role of the central agent. It collates all data inputs, even in the forms of mouse clicks or keystrokes, and sends a form of data only to the module that deals with that kind.

The modules will be inert if the input ’event‘ is not in their functional area, although the user may be continuing to input different kinds of data in the browser. This is the main difference with the layered architecture where all data must pass through all layers.

The advantages of the event-driven architecture are following:

There are also different complexities in this model, and the programmers must take care of them. For e.g.:

This architecture is best for apps with UIs, for e.g. web apps. Also, apps involving individual data blocks interacting only select modules should use this architecture.

Microkernel architecture: One for high-usage tools 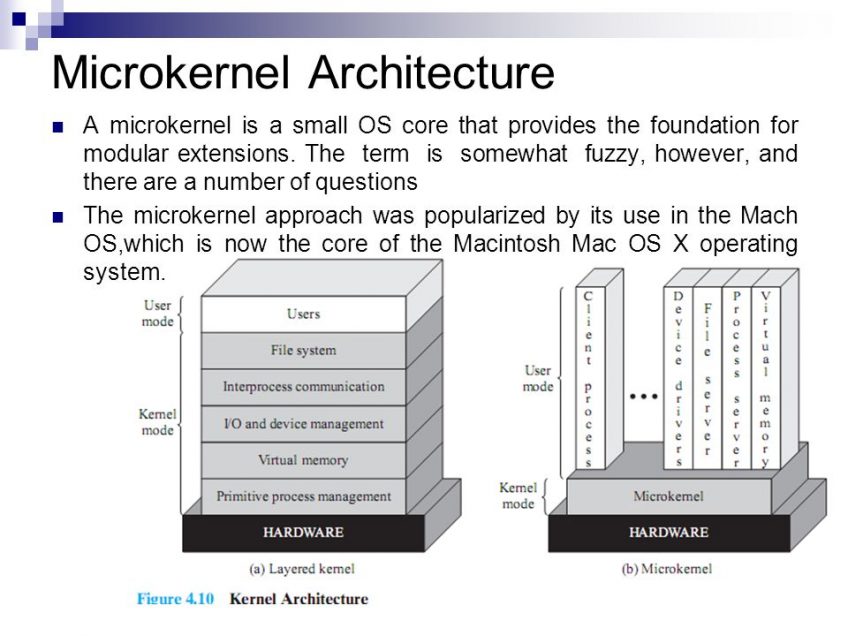 A microkernel is a small OS core that provides the foundation for modular extensions. The term is somewhat fuzzy, however, and there are a number of questions. The microkernel approach was popularized by its use in the Mach OS,which is now the core of the Macintosh Mac OS X operating system.

If you are a Java programmer, you have used the Eclipse integrated development environment (IDE), so have I. All Java developers have used it, and it‘s a tool famous for doing a lot of routine tasks all by itself without the user even prompting for it.

You have seen how Eclipse opens the files, annotates those, edits the files while starting the background processor. Once the developers are done with the coding, they can click a button to compile their code. Eclipse uses a microkernel where all the routines for these basic repetitive operations are stored.

Note that the Java compiler isn‘t part of the microkernel, rather it‘s just a bolt-on, running on top of the eclipse. You could take Eclipse and use it to code programs in other languages, and in such case, you will not use the Java compiler. However, you will use the basic routines.

The advantages are obvious. This is used in tools with heavy usage because it simplifies the common operations.

In addition to high-usage tools, this architecture is also good for apps with a fixed set of core tasks, because the dynamic set of tasks can be accomplished using bolt-on routines and those can be modified frequently.

Microservices architecture: Build many small programs instead of a giant one 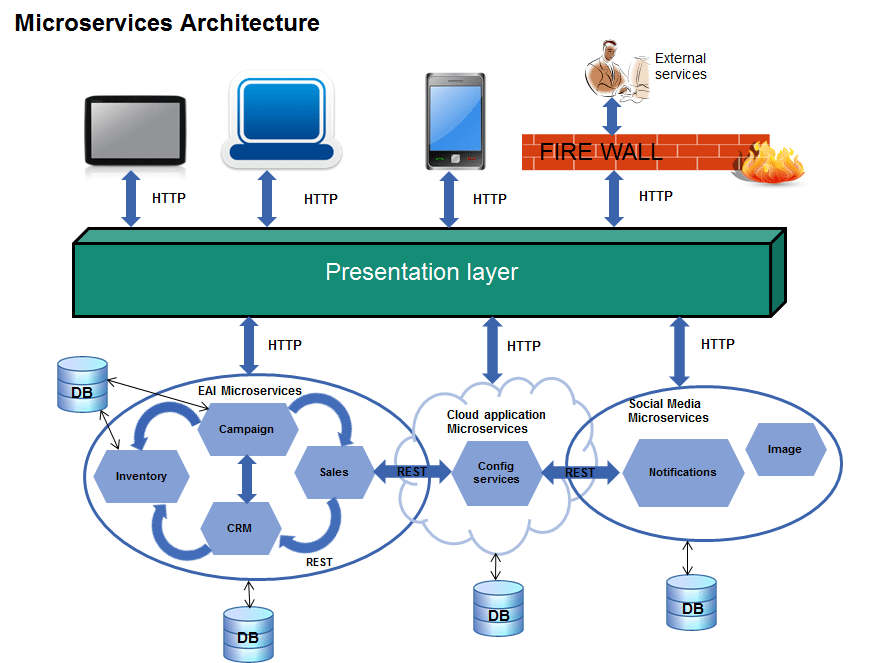 Look at the Netflix UI. The various interfaces, for e.g. to list your favorites, accounting information, the ratings you gave to films, are all different services. You can think of the Netflix website as one seamless collection of many smaller websites. The company uses microservices architecture.

This architecture allows the Java developers to build many smaller programs for different services, instead of having to build one giant program that does it all. A new feature will also require one new small program.

There are similarities with the event-driven or the microkernel architecture, however, in case of the microservices architecture the different tasks are truly separated. The demands for the different services are different, and the enterprise can run them from separate servers and scale up or down according to the demand.

For the enterprises with heavy consumer demands, this represents a significant advantage. For e.g. Netflix runs their content delivery and other tracking services on different servers. It helps them with scaling, and with 31% of the North American Internet traffic coming to them, they certainly need to scale.

There are important factors to consider when implementing the microservices architecture, for e.g.:

This architecture is good for websites with small separate components, or new web apps requiring rapid development of parts.

Space-based architecture: to address high load on the database

Websites built around a database function well when the database works well. However, under exacting conditions of high-load, the database can fail, it may not be able to keep writing log of every transaction. Along with the database, the website also fails.

To address this issue, the enterprise architects have come up with the concept of space-based architecture, where the processing logic, as well as the database, is partitioned into multiple servers. Individual horizontal shards of the database can function much better, and the web app benefits as well.

This enterprise architecture uses all ’in-memory‘ objects, and storing the information in RAM makes the app faster. This, while partitioning the storage and processing, makes for a simplification. This is also called ’cloud architecture‘.

However, there are the following disadvantages:

This is good for high-volume, but low-value, data. Social networks can make good use of this enterprise architecture. However, as I have mentioned, there are difficulties with developing good and safe caching, and data may occasionally be lost. This architecture is certainly not for the banks!

Do you want to learn more about these examples of Java project architectures? Here‘s a good book for you, and it‘s also free!  I also recommend this article.