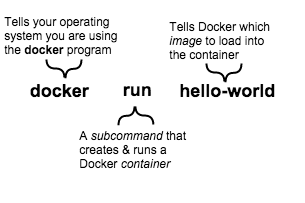 Looking for a list of Docker commands with examples?

Docker is becoming a popular technology for distributing and deploying web apps. It makes the whole development operations process easier, faster, and cheaper – all while reducing the number of servers needed. Why wouldn’t you want to use it?

I’m going to go through some of the most common Docker commands with examples and explain what they do, so you can start experimenting with them right away. We’ve already discussed Docker, its benefits, and some basic commands in a previous blog post.

Firstly, let’s get clear up some docker jargon terms to make sure you know what I’m talking about with each command:

Every command has a basic structure. Here’s an example command:

Here are some commands to try out on the command line. Just make sure you have Docker running!

Description: docker run is probably the most important command on this Docker list. It creates a new container, then starts it using a specified command. It is the equivalent of using docker create and then immediately using docker start (we‘ll go through those below).

This example will download, create and run the ‘hello-world’ container from the docker hub. Try it out!

Description: This command creates a new container and prepares it to run the specified command, but doesn’t run it. The ID is printed to STDOUT. This command is similar to docker run but the container is never started. It can be started at any time with docker start <container_id>.

This can be useful if you want to create and prepare a container for running at a later time.

This will download and create the hello-world container same as above, but it won’t run it.

Description: Starts container, either created with docker create or one that was stopped. More info.

This example will stop the container we started in the example above. You can use docker start to start it back up again.

Description: Use this command to list the docker containers available. By default, only running ones are listed, but you can add options such as -a to get a docker container list. More info.

The above command will display all containers on your system. The output will look something like this:

Description: Removes a container. Once you use docker ps to list available containers, you can use this command to remove one or more of them.

This example will remove the container called ‘redis’. The -f tag forces the action, meaning the container will receive a SIGKILL command first.

Description: Docker RMI command stands for remove image. Similar to docker rm but removes the docker image rather than a running instance of an image (called a container).

This example will remove the image name ‘test’. Use the docker images command to get a list of images and ids.

Here we are logging into a self-hosted registry by specifying the server name. Otherwise, just use docker login to log into your Docker Hub registry.

Description: Use this command to create a tag TARGET_IMAGE that refers to SOURCE_IMAGE.

Description: docker push is the command you’ll use to share your images to Docker Hub or another registry. It’s a key part of the deployment process, and you’ll need to use it with docker tag and docker login to work properly.

This example will push the image we tagged above to the repository. It’s actually the example from the docs, check out the full page here.

Description: Getting deeper into using docker, the docker logs command lets you see the log file for a running container. However, it can only be used with containers that were started with the json-file or journald logging driver

Description: Sometimes you just need to kill one or all running containers. Similar to SIGKILL (this is actually the message it will receive), docker kill will stop a container from running.

Description: Use docker swarm to manage a swarm. You can initialize a swarm, add manager and worker nodes, and update a swarm. This command is actually a whole bunch of commands in one – take a look at all of the child commands here.

This will initialize a swarm and give us back the address to add workers to the swarm later. For a better understanding of how to use docker swarms, take a look at the create a swarm tutorial in the docs.

Start Experimenting with these docker commands!

This docker reference should be enough to get you started using docker on the command line. Signup for a Docker hub account if you don’t have one and have a go at deploying your own app. Once you get used to the process, you’ll never go back to your old deployment habits.

DevTeam.Space is one such community of field-expert software developers. You can outsource these vetted and managed software developers by writing to us your project requirements. One of our account managers will get back to you for further guidance on the process.

Docker is a cloud-based PaaS platform that allows OS-level virtualization.

What is the Docker Run command?

Docker run command allows a container to be created from an image so that it can be run.

How do I run Docker?

Docker can be run either in default ‘attached mode’ or in ‘detached mode’. The attached mode runs the program in the foreground while detached runs it in the background.