MEAN Stack vs MERN Stack – Which to Choose? 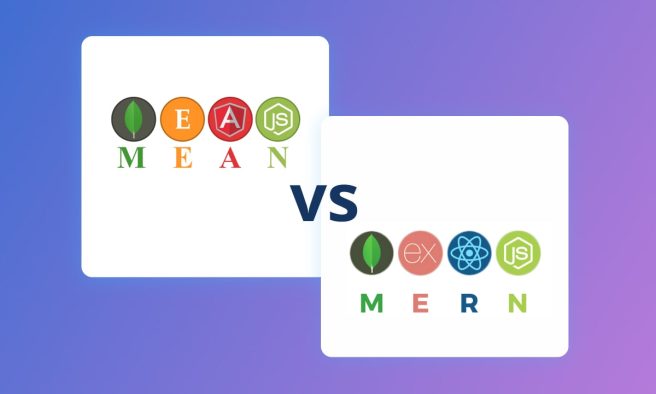 Are you interested in a comparison of the MEAN stack vs the MERN stack to decide which you should use in your next software development project?

You are at the right place! In this article, we will cover the MEAN stack vs Mern stack comparison in detail, including their key features, similarities, and differences.

Today, software development projects include a range of APIs, programming languages, frameworks, and libraries. Technology stacks help in maintaining compatibility between software modules of IT projects.

Two of the popular software development tech stacks include MEAN and Mern. Let’s discuss these in detail.

MEAN stack is popular for the development of responsive and advanced web and hybrid mobile applications. The MEAN stack consists of MongoDB, Express.js, Angular, and Node.js.

The MEAN stack is a free and open-source technology stack for building dynamic web and cross-platform mobile applications. It is based on JavaScript and provides several tools and plugins to develop and deploy scalable software applications.

Another full-stack software development stack, competitive with the MEAN stack, is the MERN stack.

It is also a JavaScript-based open-source minimalist web framework for the rapid development and deployment of web and mobile applications. React JS helps in ensuring a near-native experience with mobile apps.

Some similarities that you will find in Mean and MERN development stacks include the following:

Both MERN and MEAN stacks use the MongoDB database. It is a document-based database that stores data in JSON (JavaScript Object Notation) files.

Both tech stacks use Express.js or just Express as their backend web application framework. It is an open-source framework that runs on a Node.js runtime environment.

Node.js is also based on JavaScript and is open-source. It helps with the asynchronous event-driven programming of scalable web applications.

MERN and MEAN are similar in a way that they both offer an end-to-end development environment. Developers get access to backend and frontend development technologies to create a complete software solution.

As both are based on JavaScript technology, there is support for a complete web development cycle from server-side development to client-side. Developers only have to write code in JS which also helps in easier switching between frontend and backend.

MERN uses React, based on a modular architecture. Developers can start small and easily add other components as software application grows.

Compared to Angular, which uses Typescript, React is based on JavaScript, which helps in swift integration with other tools and APIs.

Both, MERN and MEAN stacks, have excellent developers’ community support. Being open-source, they are supported by a range of other open-source development utilities.

Some of the prominent MEAN vs MERN stack differences are the following:

The main difference between MEAN and MERN development stacks is they use Angular and React respectively. While both, Angular and React, are popular among developers, React is topping the charts for quite some years now.

With Google withdrawing its support from AngularJS or Angular 1, this lack of backward compatibility between Angular 1 and 2 also led to a decrease in its popularity in the developers’ circles.

If you are interested in Angular 3, read our article for the latest details.

Angular is a complete framework based on TypeScript and also offers its own templates for development. React is a JavaScript-based library and developers do not find it hard to work with it.

Angular provides a complete development framework whereas React depends on multiple third-party integrations for added functionality. This can affect the developer’s productivity.

Angular removes the need for adding external libraries and tools and helps in efficient application development.

Angular also provides a command line interface. Upgrading a code base is relatively efficient with a CLI, which increases developers’ productivity.

On the other hand, upgrading a React code can be time and effort-consuming, given the presence of multiple third-party libraries.

Another difference between MERN and MEAN stack technology lies in the data flow. The data flow is bi-directional in Angular, where a change in user interface components reflects in the model state automatically.

With React, this data flow is unidirectional, which means developers can only change the UI after changing the model state.

When to Choose Which From MEAN Stack vs MERN Stack?

Some of the factors that will help you choose between MERN and MEAN Stacks include the following:

Your choice between MERN vs MEAN development stacks will largely depend on the type of software application you are developing.

If it is a large enterprise-level application, then you may find using MEAN stack a better choice. It provides a systematic approach to deploying prototypes and managing large applications, like eCommerce software solutions.

Although both, MEAN and MERN, support an MVC architecture (model-view-controller) architecture, MEAN helps in the efficient management of the code base.

External API integrations are readily available with the MEAN stack whereas the MERN stack requires some extra configurations to provide support for similar libraries.

For example, Angular supports HTTP calls and connections with the backend by default. React offers its libraries for a similar purpose.

If your software application has advanced layout features and you want to deploy complex websites with interactive UI elements rather easily, MERN is a good choice. It offers a seamless display of UI screens to the users.

DOM is a programming interface for web documents, including XML and HTML documents. It is cross-platform and programming language independent.

Angular offers better performance and developer productivity for large enterprise applications. However, React uses a component-based architecture that helps in the rapid coding and scaling of smaller-sized applications.

For example, the MEAN stack allows session cookies to remain with the client side instead of the server-side making the user interaction more secure with the application. Angular supports JSON Web Token (JWT) and allows the implementation of authorization protocols.

React does not focus on security primarily. It is built with the intention of rapid development. It offers authentication controls, however, does not provide robust security against CSRF attacks.

Are you Deciding Between Mean Stack vs Mern Stack?

As discussed above, MEAN and MERN stacks are popular technology stacks among software developers today. As MongoDB, Express.js, and Node.js are common with both stacks, the real difference lies in the use of Angular and React technologies.

The choice of the right tech stack should be backed by a professional software development team to utilize them effectively for software application development.

If you want to know more about building scalable web applications, read our blog here.

You will need skilled developers proficient in JavaScript development, including the essential libraries and tools. Moreover, they should be familiar with NoSQL database technology to work efficiently with the MongoDB database.

You can also partner with these software developers by writing to us your initial project specifications via this quick form.

One of our account managers will get back to you with further information on how we can help you with software development using the latest technologies.

1. Is the full stack the same as the MEAN stack?

2. Should I use MERN or MEAN stack?

The choice of MERN and MEAN stack depends on the type of software development project you are undertaking. MERN helps in the rapid development of dynamic web apps catering to a volatile user market with a seamless user interface. Angular assists in developing and managing larger projects that are high-performant and with more code maintenance and security requirements.

3. Is the MEAN stack still popular?

MEAN stack is still a popular development stack for building software applications, including single and multi-page web applications. It is a JavaScript stack popular among the full-stack developer community for its high development speed and lower development cost.