What is Blockchain as a Service?

Interested in knowing blockchain as a service – BaaS? In this article, we will discuss the same in detail.

What is a Blockchain as a Service?

In order to offer the benefits of blockchain to the wider business community, companies such as Microsoft decided to offer blockchain technology through the cloud As Service business model. Most people are aware of IaaS, PaaS and SaaS, given that most of us in some way use cloud-based applications or storage.

The BaaS model acts in very much the same way, allowing businesses of all shapes and sizes to access blockchain-based technology without having to invest in developing it in-house first.

Therefore, the BaaS model would allow companies to access a blockchain provider‘s services where they can then access/develop blockchain-based applications.

The only downside to the BaaS model is that it demands a certain amount of centralization as transactions would need to be funneled through the host platform’s blockchain services.

Since decentralization is one of the key features that makes blockchain so useful, companies will need to think long and hard as to whether this is the right solution to their problem.

Advantages of Blockchain As a Service model:

Where Blockchain as a Service be Used? 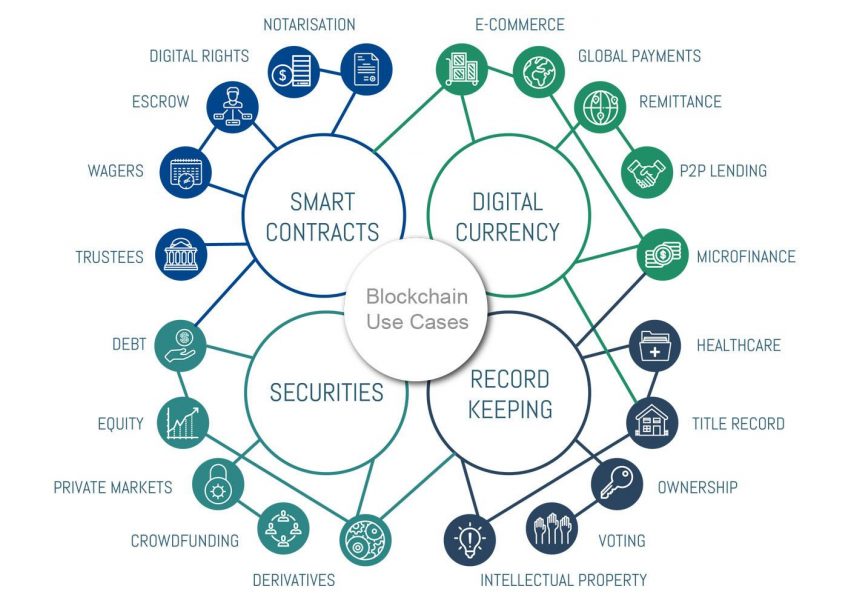 Anyone from startups to huge multinational corporations will eventually be able to use Blockchain-as-a-service for tasks ranging from improving stocktaking, securing confidential customer records, recording property ownership, to helping to launch their own ICO.

Blockchain can provide at least a partial solution to the problems underlying the vast number of transactions and processes that underwrite the entire global economy today.

Blockchain in the insurance industry is set to create accurate real-time risk assessments of customers which will allow for the first-ever ’smart insurance plans‘ that could facilitate the world‘s first pay-as-you-need insurance policies. This technology will also help to streamline internal processes, reduce fraud, and even improve customer service too.

Other industries that are set to benefit from blockchain:

Check out this article for a more comprehensive list of the industries that are set to be disrupted by blockchain.

A Few Examples of Blockchain As a Service Providers

Blockchain as a Service Amazon AWS

Amazon has been the world‘s largest cloud provider for a number of years now. It made over $6 billion from its Amazon Web Services in 2017.

It is the leading provider of IaaS, SaaS, and PaaS services that recently combined forces with the investment firm Digital Currency Group (DCG) to create a BaaS environment that it now offers through its AWS platform.

Access to financial institutions, enterprise technology companies, and insurance companies will help developers on the project to ascertain what the real business needs are for blockchain, allowing them to push BaaS development in that direction.

This is the same feedback loop based business model that Amazon used to develop such great IaaS applications in the past. As a result, few insiders doubt that AWS‘s strategy won‘t succeed in really advancing BaaS and ensuring its quick implementation.

Blockchain as a Service Azure

Microsoft‘s Azure is the second-biggest provider of cloud-based services in the world today. While Microsoft was caught napping by AWS, it quickly used its expertise and heavyweight resources to create its own cloud platform, which is called Azure.

In recent years, they have made up a lot of the ground on AWS, particularity after they migrated their highly successful Office software to the cloud. While their flagship Windows operating system continues to lose market share, Azure is quickly becoming a huge cash cow for the company.

Microsoft has followed AWS lead by recently adding BaaS modules to their existing cloud platform. However, Microsoft has chosen to focus its BaaS development around the open-source Ethereum blockchain.

For those of you who are unaware of the Ethereum Project, it is probably the most exciting company to have come out of the blockchain revolution so far. It focuses on the use of ’smart contracts‘ to facilitate a huge range of agreements that include the exchange of products and services between parties.

Microsoft Azure‘s BaaS service aims to provide fast and affordable access to blockchain technology. It offers a good development environment for developers and businesses in order to facilitate the innovation of new processes and techniques using blockchain.

Like Amazon, Microsoft plans to allow new systems to be developed in this space which will eventually be rolled out to the wider business market.

By combining blockchain developer‘s skills with their vast platform such as Azure sql database, Microsoft is offering the scalability that should hasten the development of the kind of solutions that are in so much demand.

So intent on winning this race of enterprise blockchain development with BaaS, Microsoft  has even thrown the weight of its AI services to facilitate more powerful and efficient data analysis and management.

Blockchain as a Service IBM

Just outside of the ’big three‘ cloud computing providers is IBM. It is the world‘s fourth-largest cloud provider and focuses most of its efforts on providing services to businesses. It was also caught napping by AWS in the early days of cloud development but has worked hard to catch up in the proceeding years.

IBM has developed its own BaaS service that is based on the Hyperledger BaaS system. Ibm blockchain platform also provides an environment for developers and businesses to create blockchain solutions. Its primary aim is to digitize transaction workflow through a shared ledger and to create secure blockchain networks.

Like Amazon and Microsoft, IBM hopes that this strategy will help to develop blockchain technology to the point where it can replace many of the existing solutions in use today.

Since IBM‘s core business is already focused on the business sector, it stands to gain enormously if it is able to help develop secure, reliable, and adaptable blockchain technologies before the competition.

Blockchain as a Service Ardor

Ardor is the kind of company that the cloud giants are trying to outrun. It is one of several dynamic new companies that have the potential to make a huge splash in the future BaaS marketplace.

Ardor is a public blockchain platform that allows companies to use NXT blockchain technology. This technology relies on what has become known as “child chains” which are individual blockchains that are hosted on the “Parent” blockchain that is maintained by Ardor.

Each of these child chains can have a completely different function and so allow Ardor to offer a range of BaaS services to its customers. Their website details exactly how the company intends to use this technology and what benefits it will bring their customers. What is clear is that utilizing these child chains is a novel approach to overcoming some of the downsides that blockchain technology currently suffers from.

How big can the BaaS model become?

Right now no one really knows how big BaaS is going to be. It‘s a little like asking how long is a piece of string? Since the blockchain revolution is still only just beginning, it is still struggling to keep up with all the different ideas and directions that developers are trying to explore.

Undoubtedly, this reasoning is behind the larger cloud company‘s decision to open up their resources for companies and developers to use. After all, they must have learned a lesson from when they were caught napping as Amazon took the lead in initial cloud platform development.

Gartner also noted that searches on blockchain increased 400% in the 12 months before February 2017. Since the surge in the price of the cryptocurrency market, it is likely that this figure will have risen massively yet again.

The real question that is going to limit the rise of BaaS is not whether or not there is the demand, or even whether companies actually need blockchain technology, but rather can BaaS development overcome the limitations that current blockchain technology suffers from?

The industry will need to find solutions to such problems as blockchain bloat and the massive energy requirements of blockchain processing.

As blockchains grow in size, they inevitably contain more and more information. This must be sent and received during every single blockchain transaction, resulting in vast amounts of network capacity being needed to process them.

Facilitating widespread use of blockchain solutions, including those provided by BaaS will require massive amounts of energy. Recently the Quebec region in Canada, which has a surplus of electricity, refused the request of various cryptocurrency mining companies permission to relocate there on the grounds of energy consumption.

It is hoped that the industry will be able to use solutions such as the use of child chains to overcome these problems and make blockchain a completely viable alternative to existing solutions. Once this happens, we are certain to see a rapid rise in their implementation that will truly unleash the power of the blockchain revolution.

Are you, as a business CEO or CTO, interested in blockchain adoption as a service for your business proccess? You will require a team of expert blockchain developers to help you with the process of building scalable blockchain networks using BaaS.

DevTeam.Space with their community of blockchain-expert software developers can he help you here to develop and manage scalable blockchain networks.

Write to us your project requirements for blockchain application development through this quick form and one of our technical managers will respond with the required answers instantly.

Blockchain is a decentralized database that uses allows for the creation of blocks or connected packets of data. Since these blocks are joined to the previous and next blocks, they are said to form a blockchain.

What is a Blockchain service?

Blockchain as a Service refers to third-party blockchain-based applications and infrastructure that are offered to users to develop on.

What is Blockchain actually good for?

Since blockchain platforms allow for data to be secured from unauthorized changes, blockchain applications for anything from a medical record, supply chain to digital currency.