Data analytics is becoming very important for online businesses. We write about it all the time here at DevTeamSpace. There is so much data being generated every second, and so much potential to grow your business by understanding it. But, how do you even begin to process that much data? Luckily, there are some very smart people that have spent time thinking about this problem, and they’ve come up with some great tools. Today, I’m going to discuss how to analyze video data using Hadoop.

Hadoop is an open-source framework created by Apache. It’s designed for distributed storage and concurrent processing of big data sets. In other words, it’s a technology built for dealing with huge amounts of data. It does this with a clever programming idea called MapReduce – which allows processing to be done on thousands of servers at the same time. By doing this, you can solve problems quickly that would take you days or even weeks on a single computer.

Hadoop works with a ‘cluster’ of many computers or servers built from relatively cheap commodity hardware. All of these work together to solve very large processing problems. Of course, when running lots of computers (especially for extended periods of time), you can expect things to go wrong. The beauty of the Hadoop framework is that failures are expected, and dealing with problems is a built-in functionality.

If it is designed for massive amounts of data, why would you need to use Hadoop for video processing?

Imagine trying to teach a car how to drive with manual coding alone. The number of commands and instructions you would have to give the car for every possible scenario is in the billions, probably trillions. That’s completely unfeasible, even for big companies like Google and Uber currently working on autonomous vehicles. The way the do it is by processing thousands of hours of video with clever machine learning algorithms, to have the cars program themselves.

Also, video has become the biggest and most important type of content on the internet. People love watching videos, especially on sites like YouTube and Facebook. Check out this chart showing the insane growth in videos uploaded to YouTube over the last 10 years. 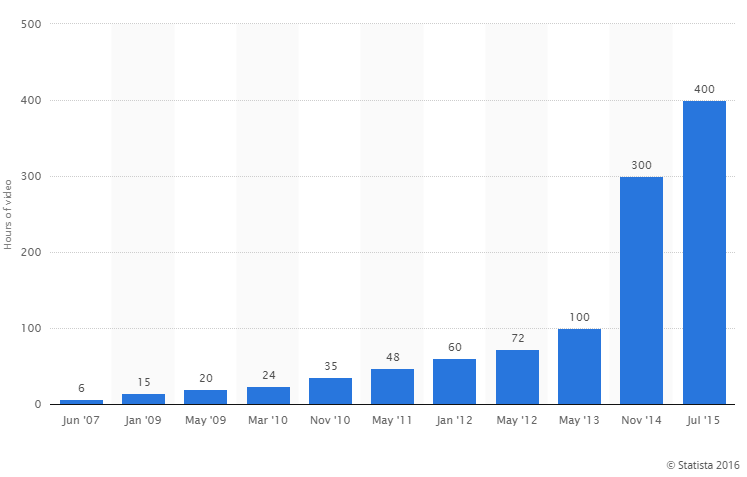 Combine this with the trend towards higher quality video, and you have an awful lot of data being created and consumed.

Hidden within all those frames and pixels is valuable information about customers that businesses can use. Habits and trends can be used to spot gaps in the market and investment opportunities. To uncover these insights, you first need a place to put all of that video data – and your computer probably isn’t up to the task.

Large-scale video analytics on Hadoop requires analyzing large data sets – and you need somewhere to put them. Rather than have one, massive file system (like a supercomputer), Hadoop uses what’s called a distributed file system. It spreads files across any number of devices so they can be accessed easily for processing. All device failures are handled automatically by the framework – so if any single part of the system crashed, it won’t bring down the rest.

This is great for businesses, as cheap, off-the-shelf hardware can be used instead of expensive specialized systems. If you need to ramp up your computing power, just add some more servers to your current system! No need to start over.

Once you’ve got a distributed file system online and a data set ready to go, the next question is how to process video files with Hadoop

With a Hadoop system, this is done concurrently. That means each of the devices in the system will be performing tasks and processing data at the same time, independently of each other. MapReduce is the part of the framework that coordinates all of this. It’s is responsible for reading the files from the distributed filesystem, scheduling tasks for all the concurrent devices, monitoring those tasks, and making sure any failed tasks are re-executed.

Don’t worry, it’s difficult to get your head around all this at first. Let’s take a look at a real-world example. One example of where Hadoop is used is in video surveillance systems. Rather than having expensive security teams to monitor endless hours of footage, a Hadoop video processing system can be used to sift through all the data automatically. To actually achieve this, a security company would need to monitor large amounts of video data very quickly. Incidents or potential dangers need to be spotted in minutes or seconds, not days.

The surveillance could be delivered to the distributed files system in real time. Then, a Hadoop cluster would analyze it frame by frame, detecting any suspicious activity a quickly as possible.

Check out this page for a detailed description of how a system like this might work, including a distributed video transcoding system. Some of the biggest benefits of data analytics using Hadoop are:

In fact, the open-source community and some commercial companies are working on tools that make Hadoop easier to use for businesses. These will make Hadoop more accessible to everyone.

The list of major companies using Hadoop is huge. Here’s a quick sample of some of the biggest ones: Data analytics using Hadoop can get very complex. Only highly skilled developers will be able to extract the right information. The problem is, there is actually a shortage of developers that actually have these skills. Rather than hiring or training a developer for your team, a good option is to consult with a team that already has experience with video analysis in Hadoop.

We’ve looked at how to analyze video data using Hadoop, some reasons you might want to, example applications, and how to find developers to do the job. Whether or not Hadoop is the right framework for your application is a difficult question. It all depends on the type of data you have, and the type of processing you need to do.

If a distributed file system and large-scale concurrent programming framework are what you need, then Hadoop is a great framework to work with.