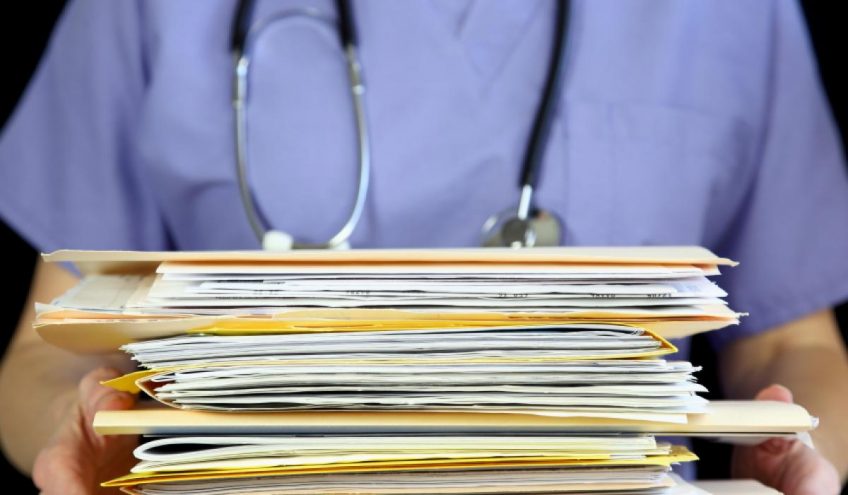 Healthcare is a truly giant industry. A recent article by Reuters predicted that “United States health spending is projected to rise 5.3 percent in 2018.” This is after U.S healthcare expenditure underwent a “4.6 percent climb to nearly $3.5 trillion” in 2017.

This means that the United States spends about the same as the entire GDP of the 4th largest economy in the world, Germany, on healthcare.

While this figure might seem shocking, it is nothing when you consider that “Global spending on health is expected to increase to $18.28 trillion worldwide by 2040.” This figure is roughly ¼ of the total global GBP in 2017.

With such rapidly escalating costs, governments and health insurance providers would certainly welcome any new technology that could help them save money while also ensuring better patient care.

One technology that promises to help improve efficiency and security within the healthcare industry is blockchain.

First pioneered to allow for the creation of a decentralized digital currency by the name of Bitcoin, blockchain can also be used to improve a number of the existing systems the global economy currently relies on.

Within the healthcare industry, blockchain solutions promise to create vastly more secure systems that will improve everything from drug supply chains to electronic medical records.

So, how can blockchain keep medical records secure?

In this article, I intend to examine the way in which blockchain technology is set to revolutionize electronic medical records in the not too distant future.

I will also examine how the integration of smart contracts with the blockchain-based solution could allow our medical records to automate prescription fulfilment and other tasks as well.

Most of us remember going to the doctors and seeing them pull out a dreary looking folder with our name written on the front. If you had found yourself going to the doctors quite frequently, your folder will probably have been loaded with different pieces of paper making it look scarily full.

When I was young, I remember walking past this immense collection of files as I made my way to see the doctor and thinking two things:

The second thought scared me a little. Would this mean that I would have to have all those horrible injections again because they weren‘t sure what I had already had and what I hadn‘t?

Clearly, these kinds of thoughts had not escaped governments either. The advent of the personal computer saw governments around the world determined to create electronic medical records to replace all of our dusty old paper records. 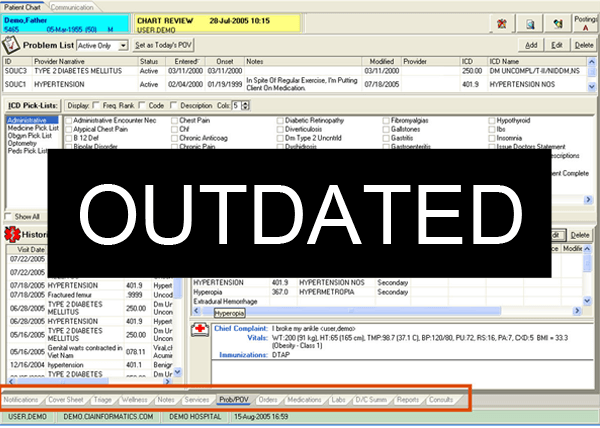 In the early 2000s, tech experts everywhere were making incredibly optimistic predictions about how electronic medical records were set to save the healthcare industry enormous amounts of time and money.

RAND Corp predicted in 2005 that the adoption of EMRs “could eventually save more than $81 billion annually.” Just over a decade later and the promise of universal EMRs, and the savings they promised, have still failed to materialize.

But what were the reasons behind this? After all, any computerized record has to be better than the paper version, right?

There were a few fundamental reasons as to why the attempt to create universal electronic records failed. 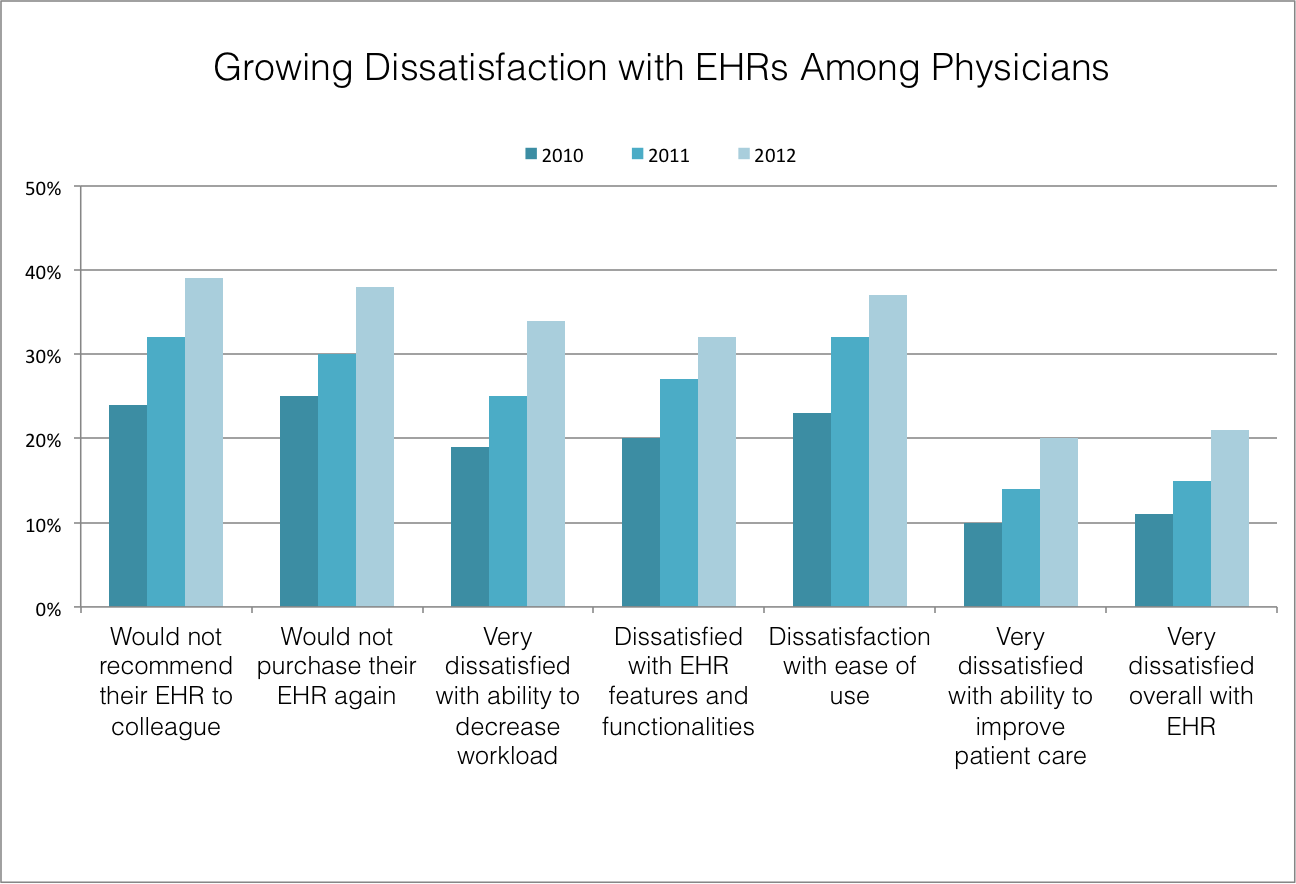 The chart above shows just how widespread dissatisfaction with EMRs has become. It is important not to underestimate the seriousness of this problem. A single oversight or mistake by a doctor could result in death. It is for this reason that EMRs should decrease workload as well as making life easier for the doctors who rely on them.

So, how can blockchain keep medical records secure and succeed when other systems have already failed?

Securing medical records with blockchain would allow for the first viable universal electronic medical records. I‘m aware that many people will remember reading the same kind of statement back in the early 2000s, but this time there is a difference.

Up until now, conventional electronic medical records databases were not able to offer the all-important security that would allow them to be accessed anywhere, anytime, and on any system. Overcoming compatibility issues between different software applications was just one of the problems.

The next question became who would store these records and ultimately be responsible for them should there be a data breach that demanded some accountability.

The article quoted Roy Schoenberg, CEO of American Well Corp, as saying that “when considering online privacy and data security our chief concerns are often financial records, credit card numbers, and bank account details. But it might be surprising to learn how little value those actually hold to hackers: anywhere from ten cents to a couple of dollars”. However, “medical records can sell for up to $30 each.”

Security Is Too Much of a Risk

The statement above shows just how much is at stake when it comes to our medical records. Health companies risk massive financial losses should they not adequately protect our data. In 2017, there were 477 separate breaches that resulted in 5.6 million patient records being compromised.

In some cases, cyber attackers demanded ransoms to be paid as part of a ransomware attack, while the failure to report a breach within 60-days led to other organizations receiving hefty fines.

Blockchain technology would prevent the majority of the 477 separate breaches that took place last year from ever happening. Any attack that exploited the single point of failure weakness of the traditional client-server model has would be useless against a blockchain database.

Since blockchain technology relies on a distributed network there is no one point of failure. This means that it is not possible for hackers to simply find a security flaw and then gain access to the data in this way.

Should a hacker target any one node on the blockchain network and attempt to make an unauthorized change then the other nodes will prevent it from happening.

As each participant on the network has a complete copy of the entire blockchain ledger, they are able to independently verify any new block being added and identify any attempt to alter any previous block.

Blockchains are designed to be unalterable once written unless the change has the support of 51% of the network. This makes them excellent for storing patient medical records as it means any data in the record cannot be tampered with.

As every new data block that is added would also contain details of the doctor who added it, blockchain EMRs would offer full accountability for the data that they contain.

In the case of incorrect diagnoses, for example, patients could be confident that there is no way that records could be altered should the doctor or healthcare provider wish to deny accountability. Creating a non-centralized EMR blockchain would mean that it is possible for any authorized healthcare provider to access the data.

Since no one healthcare provider would be liable for any data breach when using such a database, there need not be any resistance to making records universally available. As long as a provider has software that is compatible with the data to the blockchain then they will be able to access it.

Aside from allowing lifesaving care by emergency services to be improved, such universal access also promises to save healthcare providers huge sums of money from lower administration costs relating to the upkeep and transfer of records as well as from reduced liability from data breaches, etc.

The really exciting thing about this new technology is not just how blockchain securely stores health records but how blockchain also allows for automation to be added to EMRs.

Smart contracts can be programmed to initiate just about any set actions imaginable. In the above case, a contract would be created once the doctor entered a prescription into the system. This would immediately send a request to the pharmacy who would then be able to prepare the order.

Such a system would also allow subsequent prescriptions to be automatically issued without the need of the patent to return to the doctor. In many cases, patients are forced to make such trips as doctors are not able to give out large doses of drugs that carry the risk of overdose, etc. Automated EMRs could help make this problem a thing of the past.

All these points provide an answer to the question How can blockchain meep medical records secure?

The great news is that companies like Medicalchain are already developing blockchain-based EMRs. Medicalchain has already begun working with Britain‘s NHS in its University Hospital Lewisham and Queen Elizabeth Hospitals and plans to recruit more health organizations to help it develop its software further.

Its platform is built on Hyperledger Fabric architecture and allows universal access to its records, provided that suitable authorization is given.

Medicalchain‘s blockchain solution also allows for varying levels of access to records which means parents can now control or access to parts of their children‘s medical records should they need to consult another doctor or prove a child‘s illness to a school, for example.

For more on how this new company intends to unlock the power of blockchain then read Chris Hall‘s article “An Introduction to Medicalchain: Blockchain for Electronic Health Records.”

Applying blockchain technology to the electronic health records industry is set to bring about some exciting new changes to the availability and use of our medical records. I hope I managed to explain whether blockchain can keep medical records secure and how it will do that.

While it remains in the early days, I do believe that blockchain will overcome the difficulties that caused such disappointment in past attempts to create electronic medical records.

The main challenge that blockchain is sure to face comes from storing such large amounts of data on the chain. Blockchain bloat is a fundamental problem that pertains to all blockchains.

The amount of data required for the 100‘s of millions of medical records currently stored by healthcare providers worldwide will take a vast network of nodes to maintain and process.